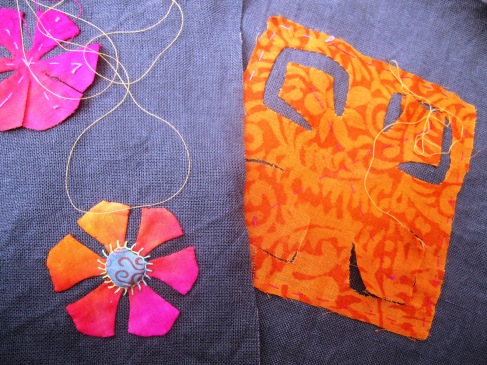 Last weekend I trundled down by train to Dorset and got together with some women I met on my recent trip across Gujarat and we had a lovely time experimenting with Indian applique techniques.  On our travels we had seen many fine examples of applique, often white on white for long window panels, but mainly in beautiful strong colour combinations such as this:

Hemmed applique is the simplest form of applique.  Motifs are simply cut out of fabric and tacked onto the background.  Edges are then turned in and hemmed or slip-stitched, leaving the background fabric visible between the applied pieces.  Simple it may be in theory, but in practise very fiddly!

In Rajasthan & Gujarat, western India, appliqued cloths are used to decorate bridal carts pulled by oxon, creating tent-like structures to shield the bride from prying eyes.  In Uttar Pradesh appliqued cloths, decorated with scenes from Indian mythology, are left as offerings at shrines on Krishna’s birthday in places of reverence for both Hindu and Muslim pilgrims.

This form of applique also has a variation known as Reverse Applique.  A layer of fabric is tacked onto a base layer of a contrasting colour.  Cuts are then made into the top layer and the edges are turned back under and sewn down with small stitches.  Thread that matches the colour of the top layer is used so that the stitches will be invisible (or nearly!).  The main pattern is created by exposing the bottom layer.  Subtle or bold effects can be achieved by varying the colour/design of the fabrics used.  If you would like to have some fun learning this technique yourself, sign up for one of my Indian Applique workshops. New dates added regularly.

I’m delighted to announce that I will be hosting workshops led by Sarah Pedlow of Threadwritten Textiles on the following dates – go to her Eventbrite Page or her Website for more details of each technique, and to book

Part of textile group:
WOMEN OF THE CLOTH